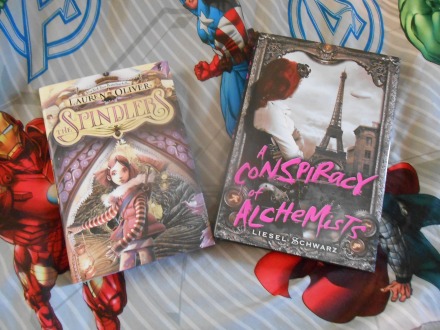 More fun from the Dollar Tree! I’ve been enjoying the pre-back-to-school inventory at the Dollar Tree lately (seriously if you’re into journaling or stationary or related items you need to go check it out!).

The Spindlers by Lauren Oliver

Evocative of Alice in Wonderland, this novel from New York Times bestselling author Lauren Oliver is a bewitching story about the reaches of loyalty and the enduring power of hope. Perfect for fans of the author’s other middle grade novels: Liesl & Po and the Curiosity House series.

Looking across the breakfast table one morning, twelve-year-old Liza feels dread wash over her. Although her younger brother, Patrick, appears the same, Liza knows that he is actually quite different. She is certain that the spindlers—evil, spiderlike beings—came during the night and stole his soul. And Liza is also certain that she is the only one who can rescue him.

Armed with little more than her wits and a huge talking rat for a guide, Liza descends into the dark and ominous underground to save Patrick’s soul. Her quest is far from easy: she must brave tree-snakes, the Court of Stones, and shape-shifting scawgs before facing her greatest challenge in the spindlers’ lair, where more than just Patrick’s soul is at stake.

A Conspiracy of Alchemists by Liesel Schwarz

LEAVE IT TO CHANCE.

Eleanor “Elle” Chance, that is—a high-flying dirigible pilot with a taste for adventure and the heroine of this edgy new series that transforms elements of urban fantasy, steampunk, and paranormal romance into pure storytelling gold.

It is 1903, and the world is divided between light and shadow. On the side of light is a wondrous science that has transformed everyday life by harnessing magical energies to ingenious new technologies. But each advance of science has come at the expense of shadow—the traditional realm of the supernatural.

Now two ancient powers are preparing to strike back. Blood-sucking immortal Nightwalkers and their spellcasting Alchemist allies have a plan to cover the whole world in shadow. All they require is the sacrifice of a certain young woman whose past conceals a dangerous secret.

But when they come after Elle, they get more than they bargained for. This enterprising young woman, the daughter of a scientific genius, has reserves of bravery and determination that even she scarcely suspects. Now she is about to meet her match in more ways than one: a handsome yet infuriating Warlock named Hugh Marsh, whose agenda is as suspect as his charms are annoyingly irresistible.

More Science Fiction and Fantasy novels for me to devour! Sorry for the sporadic posts, life has been distracting lately!