No Way Out by Christine Kersey

I’m guessing this is what’s called a “Cozy Mystery”. The main character is a woman, there is no blood, guts, murder, or violence to speak of either. What happens is her husband disappears, then there are rumors he’s done something illegal, which stretches the boundaries of their marriage.

The pacing is alright, the characters are believable, I’m just not sure I’m a fan of this genre? I’ve honestly not read a cozy mystery either in a long while or ever, so I’ve no frame of reference for this. Also, it plays off as a crime/mystery novel which more reminds of something that James Patterson would write, but this isn’t that.

It’s not terrible, it’s just not my cup of tea.

This little novella is the prequel to series of ebooks about, well, a ghost or spirit. This one chronicles the main character of this series journey from life to death to government employment. It gives a decent introduction to the main character herself and the environment she now inhabits.

I don’t know if I’ll be checking out the rest of the series, mostly because I have plenty to read already, but it is an interesting concept and it was entertaining.

I don’t read a lot of Danielle Steel but I like that her novels, while romantic in nature, don’t specifically focus on the romantic elements of her storylines. They more so tell a story that encompasses many lives and generations, eventually completing a circle that she started at the beginning.

I also was deeply interested in the horses of this novel. Lipizzaner. As someone who has grown up with horses I love that this element was weaved into the lives who’s stories unfold here. While some of it is not entirely realistic, I respect that it was used to prove how important the horses were to the lives of the characters.

I have other books by her, maybe I need to read a few more of them.

Two at a time seems to be the magic number for me to check out from my local library. So when I was done with the last two books from the library I checked out two more, one, the second in a series from James Patterson,  the other a book about horses and family from Danielle Steel.

The sensational killings that have rocked San Francisco appear to be unrelated except in their brutality. But detective Lindsay Boxer senses there’s some thread connecting them all. She calls her friends in the Women’s Murder Club together to see if they can discover what it is. Surely some clue has been overlooked by their bosses and male colleagues.

Working with Chronicle reporter Cindy Thomas, Assistant District Attorney Jill Bernhardt, and medical examiner Claire Washburn, Lindsay discovers that there is indeed a link. The victims were of different ages, lived in different locations, and were killed with different weapons. But each had a close relative in a particular profession, a profession that sends a chill through Lindsay’s heart.

The partners in the Women’s Murder Club realize that this killer is after something unspeakable, something deeper than revenge, and that the next target could be one of them. They deduce where the killer is likely to strike next and bait a trap that can’t be resisted. But if their calculation is wrong, the consequences will be lethal. And there will be no second chance.’

This is a story of courage, friendship, and fate as two families face the challenges of war… and the magnificent stallion that will link them forever.

Nicolas von Bingen and Alex von Hemmerle, titled members of the German aristocracy, have been best friends since childhood. Both widowers, they are raising their children — Nick’s two lively boys and Alex’s adored teenage daughter — in peace and luxury on the vast Bavarian estates that have belonged to their families for generations. While Nick indulges in more glamorous pursuits, Alex devotes himself to breeding the renowned white Lipizzaner horses that enthrall audiences throughout Europe with their ability to dance and spin on command, majestic creatures whose bloodlines are rare and priceless.

But it is Nicolas’s bloodline that changes everything, when his father receives a warning from a high-ranking contact inside the Wehrmacht. A secret from the past has left the family vulnerable to the rising tide of Nazism: Nick’s mother, whom he never knew, was of Jewish descent.

Suddenly Nicolas must flee Germany, wrenching his sons away from the only home they have known, sailing across the Atlantic for a new life in America. Their survival will depend on a precious gift from Alex, their only stake for the future: eight purebred horses, two of them stunning Lipizzaners. In Florida, where Nicolas joins the Ringling Brothers Circus, he becomes Nick Bing, with Alex’s prize white stallion — now named Pegasus — the centerpiece of the show.

Pegasus tells the story of a family reinventing itself in America, while the country they left behind is engulfed in flames and madness, and men like Alex von Hemmerle are forced to make unbearable choices. Alex’s daughter will find sanctuary in England. In America, Nick will find love, his sons will find a future, and their left-behind world will eventually find them. A novel of hope and sacrifice, of tragedy, challenge, and rebirth, It is a brilliant family chronicle that unfolds across half a century—a masterwork from one of our most beloved writers. 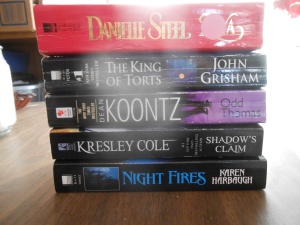 A little more than awhile ago I went thrifting with my mother. I was looking for one specific non-book item. But if you’re a book lover like me, you’ll find interesting books even if you weren’t on the look out.

These descriptions got a little long…read them under the cut.

END_OF_DOCUMENT_TOKEN_TO_BE_REPLACED

When Autumn Leaves by Amy S. Foster
My rating: 5 of 5 stars

Wow, I finished this book much quicker than I expected. This was a bad thing because I enjoyed reading this book so very much.

Autumn is leaving her hometown, but needs to find her successor. She has a year to do it.

This book doesn’t really have a main character, but if I had to choose one, it would be Autumn Avening. Throughout her searching for a replacement we meet several people who inhabit her hometown of Avening.

All of them have their own personalities with interesting quirks, and a little story all their own. All these little stories fuse together to tell the history, atmosphere, and community of Avening.

I have not heard of this writer before, her claim to fame is as a lyricist and this her first novel. I found it in Barnes & Nobles on one of their sale/discount priced tables. After reading this one I would like to see what else Amy S. Foster comes up with.

One Glass is Never Enough by Jane Wenham-Jones
My rating: 3 of 5 stars

I have read Jane Wenham-Jones before I found this little chick-lit book for free on Amazon. However, they were her how-to-write non-fiction books. While they gave me an idea of her writing style, they gave me no indication on she does fiction writing.

I mentioned this was a chick-lit book, and it is, but it’s a very modern one.

As the story goes along there are little bumps in their lives. It never amounts to anything life-threatening, but they are life-changing events.

I said modern and then never specified that did I? Well, I’ll try to explain that without giving up too many spoilers. Gaynor’s husband stays away from home longer and longer, and she obviously doesn’t like it. While I was able to guess what was going on about halfway through…Gaynor was completely clueless.

Same thing with Sarah. She has a love interest, but two minor bumps happen to her as well. One that is never apparent until the end of the book. Claire, by far, has the easiest time of things, because her boyfriend basically gets in her face and talks sense into her.

While the book is supposed to be about all three women, Gaynor steals the spotlight and is what I would call the main character. All the storylines are tied up nicely at the end, and while I do like Jane Wenham-Jones writing style and the story was modern (which I like), chick-lit is not my favorite genre so I probably won’t seek out more by her…unless I find them free on Amazon again.

Get it on Amazon